12 The human body has many parts, but the many parts make up one whole body. So it is with the body of Christ. 13 Some of us are Jews, some are Gentiles,[a] some are slaves, and some are free. But we have all been baptized into one body by one Spirit, and we all share the same Spirit.[b]

22 In fact, some parts of the body that seem weakest and least important are actually the most necessary. 23 And the parts we regard as less honorable are those we clothe with the greatest care. So we carefully protect those parts that should not be seen, 24 while the more honorable parts do not require this special care. So God has put the body together such that extra honor and care are given to those parts that have less dignity. 25 This makes for harmony among the members, so that all the members care for each other. 26 If one part suffers, all the parts suffer with it, and if one part is honored, all the parts are glad.

27 All of you together are Christ’s body, and each of you is a part of it. 28 Here are some of the parts God has appointed for the church:

But now let me show you a way of life that is best of all.

I have had the privilege of being a part of several local bodies of Christ since I became a follower. Some bodies functioned very effectively Advancing His Kingdom.

Some, unfortunately, decapitated the head and as a result, every other part began to die due to the lack of blood flow.

With these experiences in mind, when Doug and I started a ministry that was designed to support many local churches, I hoped to remain humbly submitted to the head and never say to an eye or a foot “I don’t need you.” Years later, I wish I could emphatically state that that’s always been the case, but I can’t. I am still a sinner, saved by grace…and I am still learning what it means to be a loving part of the body of Christ.

In my very short journey of being a disciple and “ministry leader”, I’ve realized that one of the most difficult aspects of being seen and heard is that hidden parts sometimes mistakenly think that I am more important. Given enough praise and acknowledgement for my function, I may be tempted to think that I can operate the entire body on my own. As that pride seeps further down into my soul, I might even begin to believe (albeit subconsciously) that I am the head and that my gifts, skills and leadership abilities are the sole reason for any advancement. Eventually, though, the less honorable parts will grow tired of my pompous attitude and of being ignored and they will cut themselves off from me- and perhaps even the entire body. As a result of my unexamined sin, serious injuries can occur, and if not dealt with quickly, the body will bleed out… 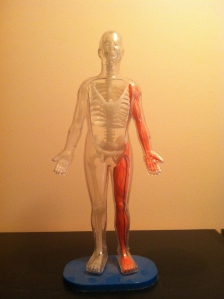 ized that when those self-gratifying thoughts begin to rummage through my mind I can call 911 and the Holy Spirit will rush me to the ER. There, as I lay myself out on a gurney before the Great Physician He is able to show me an x-ray of my heart….and I am moved to repent. Then, as He submerges me in His healing antiseptic grace, I am once again able to know that His Son is the only rightful head of the church and ALL His children are crucial parts of His body.