In that day the wolf and the lamb will live together;  the leopard will lie down with the baby goat. The calf and the yearling will be safe with the lion,   and a little child will lead them all.

Before our whirlwind family trip last week, Doug and I began preparing our children for what they may experience in the big cities we planned on visiting. We told them about the noise, the smells, the sights, the difficulty in navigating busy streets, the traffic, the multitude of people, the venders selling things to tourists, etc. etc. etc. What we could not prepare them for, however, was their reaction to the poor.

We passed several people on the streets of Philadelphia during our 2-day visit, but one man in particular stood out to our son. Our family was completely oblivious, however, to his encounter until we left the noisy streets and returned to our less noisy hotel room. Moments later, our son began to weep uncontrollably. After multiple attempts to console him, he was finally able to sputter out a few words as to why he was so distraught;

“that man…… sitting on the street……was hungry….and had no where to live……”

Although I was moved by our son’s compassion, I’m embarrassed to admit that my initial thought was “yeah, he probably lives in some posh apartment and pays for all his luxuries by begging tourists for money.” Moments later, as I continued to watch our sons heart break, I realized my judgment (based on prior experiences) was an indicator of my heart- which was not being motivated by love.

A short time later, with a changed heart, I prayed with our son, right there in our hotel room in the city of brotherly love, and asked God to fulfill every need for that man. Afterwards, I told our 7 year old that the next time he saw someone in need to SPEAK LOUDLY so we could stop and do something. 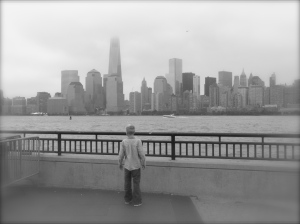 Four days later, as our family was walking down 5th Avenue in New York City, we passed a man sitting on the sidewalk with a cardboard sign. I slowed my pace, waiting for our sons voice to ring out above the noise of the people, the taxi drivers blasting their horns and the construction equipment rumbling overhead…..a heartbeat later I heard, “MO-OOOOOMMM….there’s a man!!! I want to give him some money.”

I stopped dead in my tracks, turned around to look at my husband, who was already pulling cash out of his pocket, and watched, through tear filled eyes as our son, escorted by his father, walked back up the crowded sidewalk to give a tangible gift of love to a man in need. After the gentleman accepted the money, he looked at our son and said “God bless you both.” Indeed, He already had- for a little child had led us to a greater understanding of how to love our neighbor; whether they are poor in spirit, poor in relationships, poor in truth, poor in hope, poor in joy, poor in kindness, or poor in possessions.

31 The second is equally important: ‘Love your neighbor as yourself.’No other commandment is greater than these.”

If you help the poor, you are lending to the Lord— and he will repay you!

After being born again and baptized in water & fire, Jodie made the decision to pick up her cross and follow Jesus. Twenty years later, she is still learning to be a disciple…and make disciples. Jodie dedicates herself to the Lord each day in marriage, mothering and ministering to others. She, her husband and their four homeschooled children (2 alumni, 2 students) currently reside in Sanford, NC.