For the last few years, we’ve (by that, I mean, my husband!) been repairing cracks in the fireplace and front porch of our home. As the problem persisted, however, we eventually hired a contractor to repair and re-cement the fractured bricks. 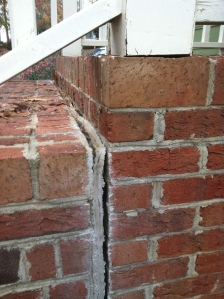 Last month, after much prayer and waiting, we decided to go ahead with some other household projects we had been delaying. One of which, was a full kitchen remodel. Our house was built in the 1980’s and the décor and design isn’t necessarily our style. We’ve done numerous upgrades and cosmetic changes to every room of our colonial style home, but I’ve been HGTV-dreaming of bringing our kitchen (aka: my workplace) into the 21st century for 8 years! With sketches and designs in hand, I called our contractor to begin the task of getting estimates. Upon his recommendation, we also decided to call a structural engineer to see if he could fix the chimney and front steps at the same time. I was NOT prepared for what he had to say, after he inspected our property. “Um, ma’am…the front steps and chimney are cracked and settling, but that isn’t the real problem. Your foundation has sunk 1-2 inches and will continue to drop. You can choose not to repair the issue, but eventually, it will pull so far away from the original foundation that it may bring the living room, upstairs bedroom, chimney and front steps crashing down.”

If that wasn’t enough of a punch in the gut, the estimate for repairing it WAS.

In the coming weeks, a team of engineers will descend upon our property in order to drill steel pipes past the sandy soil in our front yard (we live in the Sandhills of NC) until they hit bedrock. Once the jacks are literally cemented into the ground, they will attempt to lift our house back to its original foundation.

During the first several years of our marriage, Doug and I also made some cosmetic and design changes to our relationship. For the short term, they seemed to work- and look good from the outside…but eventually, issues began to resurface and show major cracks in our foundation. What we failed to realize was: our lives- and our marriage was not built on solid rock. And when the rains, floods and winds of sin, neglect and unforgiveness hit, they began to destroy our home.

Thankfully, however, we eventually chose to surrender to the Master Structural Engineer and through the help of a few contractors, we were able to see the cracks, drill down to bedrock, install pillars of Truth and begin to restore our relationship to His original plan. Was it costly? Yep. Moving out of sinking sand not only affected our hearts, minds and souls- it also affected our bank account. But believe me when I tell you- it was completely worth it (let’s hope I say the same thing when I write that check out to the engineers!).