19 While Apollos was in Corinth, Paul traveled through the interior regions until he reached Ephesus, on the coast, where he found several believers.2 “Did you receive the Holy Spirit when you believed?” he asked them.

“No,” they replied, “we haven’t even heard that there is a Holy Spirit.”

3 “Then what baptism did you experience?” he asked.

And they replied, “The baptism of John.”

4 Paul said, “John’s baptism called for repentance from sin. But John himself told the people to believe in the one who would come later, meaning Jesus.”

5 As soon as they heard this, they were baptized in the name of the Lord Jesus.6 Then when Paul laid his hands on them, the Holy Spirit came on them, and they spoke in other tongues and prophesied.

Like so many things in my strong-willed life, I was saved bass ackwards.

I was a privileged kid that grew up in a middle-class household with married parents and a sibling who went to church every Sunday (and sometimes other days of the week). 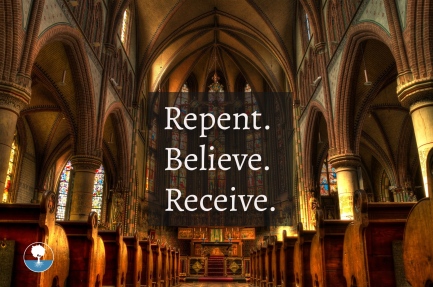 I was a privileged teenager who moved to the bible belt and got “saved” and “sprinkled” in a “sanctuary” adorned with stained glass windows and golden lacquered name plates of financial donors on the pews.

I was a privileged bride who married a groom whose parents were also married believers.

I was a privileged college graduate who lived in a big city with a variety of denominational and non-denominational churches to choose from.

I was a privileged citizen of a state and country founded on Christian principles in which the law allows freedom to practice whatever religion I choose.

But at the age of 23, this privileged girl was still going to hell.

Yes, I had heard the gospel.

Yes, I had engaged in religious activity that was required by religious leaders.

Yes, I had tried to obey the law of Moses (well, in action- but not in heart).

I did not repent.

My heart had not been made right with God (because I didn’t think that I had been wrong).

I just got a few drops of water on my head and a fancy certificate of baptism, but I wasn’t saved.

I was still a sinner- a deceived sinner that was wrongly identified as a saint.

Mercifully, however, God intervened, like He did on the road to Damascus with a sinner named Paul. Only my conversion was in our bedroom while sitting on our king-sized bed (yep- I met the King of kings on our king-sized bed!). Nine months pregnant and feeling like a beached whale, I was blinded by the light that entered my soul. I was deeply grieved over every sin I had committed against my Creator. I began to pour out the wretchedness in my heart, confessing in detail, every commandment I had rejected. I repented for my rebellion against the Father, which grieved His heart. At that moment, I believed Jesus died, was buried and resurrected for ME. I confessed Him as Savior and I was later baptized under water.

Lord, forgive me! Forgive the Church!

Mercifully, however, God intervened again, but not like He did with the believers in Ephesus when Paul asked if they had received the Holy Spirit. Instead, I was at home, praying in the living room with my husband when God answered my pleafor help in trusting Him as Savior AND Lord. Heaven opened and spiritual fire poured down all over my body. Overwhelmed with the force of power that was rising from the depths of my spirit, I ran to our bedroom, opened my mouth and began speaking in tongues. The unknown language I heard initially scared me; I didn’t know if I was possessed by demons or possessed by Pentecostals!

Have you heard the Good News? Have you repented of your sin against the Father? Have you believed Jesus as Lord AND Savior? Have you received the Holy Spirit? Do not be deceived as I was. Don’t think you’ll inherit the Kingdom of Heaven by obeying religious laws. It’s only by His grace that you can be saved. It’s only by His power that you can be baptized into the Father, Son AND Spirit. Don’t wait! Repent. Believe. Receive. Do it today.